At the end of 2002, after a couple of years dabbling on the internet (beginning with Yahoo! GeoCities in 1999), I wanted to retire my old domain name ten-zero.net (for obvious/not-so-obvious reasons) and move to a single-word dot com. I practically went through half the dictionary looking for a relatable word that was available and stumbled across “seriocomic”.

seriocomic.com was registered on 6 February 2003. It took me a week to remember that I was supposed to celebrate the event…

The first incarnations of the website were mostly banal blog posts on my boring life at the time, and the inklings of what was to come in terms of the photo-blog under the pretentious (as everything was labelled then) “imagery” category.

By 2005, the word blog was being retired in favour of the photoblog. The first redesign around this effort was pretty much a straight homage to two of the better-known photobloggers at the time: David Nightingdale’s Chromasia and Noah Grey’s “Grey Expectations“.

Here’s a screenshot from the Internet Archive Wayback Machine: 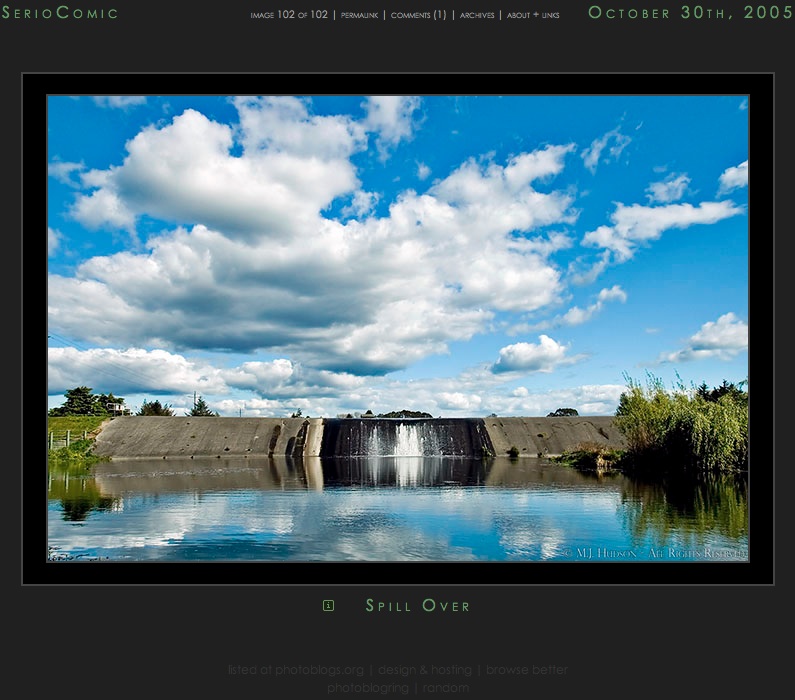 In June of 2007, after managing a fairly good output of almost a photo a day, I had hit 500 images and celebrated with a montage:

The site continued on at a nice little trot for a while, and after moving to Melbourne in 2008, it also served as the home for my “Project 101 things in 1001 days” sideshow.

The theme has remained constant since it was introduced in 2007 as a hack of the now-defunct Hemingway Theme for WordPress. It’s starting to show it’s age now, with more hacks holding it together than any site should/would require. In fact, it’s really due for a redesign/rebuild to make use of features such as responsive design, custom post types and taxonomies, updated replacements for plugins no-longer maintained.